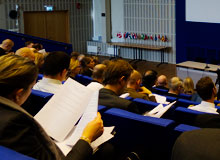 The International Society of Military Sciences held its second international conference in Stockholm on 10-11 November 2010, hosted by the Swedish National Defence College. The Society was founded in 2008 by eight national defence academies and colleges with the purpose of building a network for the creation, development, exchange and diffusion of research and knowledge about war, conflict management and peace support efforts. The aims and academic interests of the ISMS are obviously quite broad. This was reflected in the conference programme, which consisted of eight tracks on topics including defence management and economics, military history and war studies.

International conferences usually leave little time for discussions. Not this one! The relatively small number of participants in the law and ethics working group allowed us to debate the individual papers in great detail, with the effects of the Beharmi case and the notion of ‘effect control’ featuring prominently in our discussions. On the second day of proceedings, Professor Marco Sassòli gave a keynote speech on ways to improve compliance by armed groups with the laws of war. Professor Sassòli drew heavily on the work of Geneva Call, an NGO which works with non-State actors involved in armed hostilities, such as guerrilla groups, to promote their compliance with norms of international humanitarian law and international human rights law. It was interesting to hear how the fight against terrorism impedes the humanitarian engagement with some of these groups.