After Lisbon: EU Decisions in CFSP 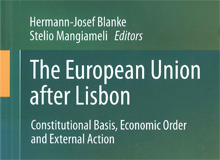 My paper addressing the simplification of the EU’s legal instruments for the CFSP has just been published in H-J. Blanke and S. Mangiameli (eds) The European Union after Lisbon: Constitutional Basis, Economic Order and External Action (2011) by Springer. In this chapter, I argue that the manner in which the Treaty of Lisbon gave effect to the objective of simplification in the context of the CFSP signals a return, in essence, to a state of affairs that existed under the Maastricht Treaty.

The book contains many contributions by eminent scholars and is well worth a read. Here is the publisher’s descrition:

The book contains 24 contributions from European law scholars and practitioners analysing the constitutional basis of the European Union and the normative orientation of the Common Foreign and Security Policy (CFSP) as well as the central economic and monetary provisions (TFEU) after the Reform Treaty of Lisbon. Presenting the findings of a European research team, which is composed of authors from eight Member States, the publication underlines the aspiration of the editors to thoroughly analyse the constitutional law of the European Union currently in force.