Law as an asymmetric capability 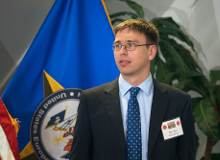 I am re-posting a news item from the Exeter Centre for International Law:

‘Law is an asymmetric capability’ was the message that Dr Aurel Sari conveyed at two international conferences last month.

Speaking on 13 September 2017 before an audience of military and civilian legal advisors in Stuttgart (Germany), Dr Sari offered an overview of the legal dynamics of hybrid threats. By exploiting the faultlines of international law, hybrid adversaries seek to create legal asymmetries in order to gain a military advantage over their opponents. Although neither hybrid threats nor the use of law as an instrument of asymmetric warfare is new, the legal challenges that hybrid adversaries present are real and significant. They include challenges not only to individual nations and security organisations, but also to the international rule of law.

On 20 September 2017, Dr Sari spoke on the subject of hybrid warfare at a conference held in Bruges (Belgium). Sharing a panel with Dr William Boothby (former Deputy Director, Legal Services, Royal Air Force), he discussed in greater detail how legal thresholds enable hybrid adversaries to exploit the rules of international law to their own advantage. He also offered a series of recommendations on how nations and international organizations exposed to such tactics may respond. The conference was organized by the International Society of Military Law and the Law of War, with the support of the University of Melbourne and the Exeter Centre for International Law.

Dr Sari’s presentations drew on his ongoing research in this area, including a workshop he convened in 2015 and a paper forthcoming later this year.