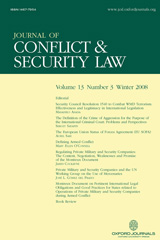 This article offers an overview of the main jurisdictional provisions of the EU Status of Forces Agreement (EU SOFA) concluded between the Member States of the EU in 2003. The purpose of the agreement is to define the legal position of the military and civilian personnel, as well as the forces and headquarters, deployed by one EU member state in the territory of another member state in the context of the European security and defence policy. By facilitating the transit and temporary deployment of European military and civilian personnel throughout the territory of the EU, the EU SOFA makes an important contribution to the development of the EU’s crisis management capabilities.