A critical look at Kadi 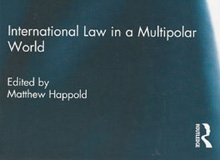 International Law in a Multipolar World, edited by Matthew Happold, has just been published by Routledge. I have contributed a chapter examining the ECJ’s decision in the Kadi case, arguing that the judgment of the European Court of Justice displays a considerable dissonance between the formal legal arguments employed by the Court and the substantive values that motivated its reasoning.

Here is the publisher’s descrition of the book:

Since the creation of the United Nations in 1945, international law has sought to configure itself as a universal system. Yet, despite the best efforts of international institutions, scholars and others to assert the universal application of international law, its relevance and applicability has been influenced, if not directed, by political power. Today, the “decline of the West” and ascent of China and India poseparticular challenges for international law and institutions. The international system appears to be moving towards multipolarity, with various sites of power competing to exert influence in the world today.

With contributors from a variety of countries providing perspectives from the disciplines of international law and international relations theory, International Law in a Multipolar World addresses the implications that multipolarity poses for the international legal system. Contributors including Jean d’Aspremont, Jörg Kammerhofer, Alexander Orakhelashvili, Christian Pippan and Nigel White, explore issues such as the use of force, governance and democracy, regionalism and the relevance of the United Nations in a multipolar world, while considering the overarching theme of the relationship between power and law.