This year’s ARRC legal conference (ARRCADE BRIEF 2015) focused on the legal challenges presented by hybrid warfare threats. The confernece built on the workshop on hybrid warfare I convened in collaboration with the ARRC in Exeter in September 2015, as well as the lessons learned during exercise ARRCADE FUSION 2015. Below is the summary of the event by the ARRC public affairs team. 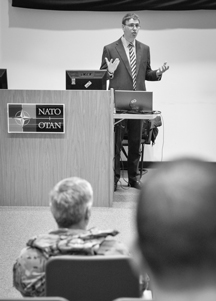 Debates about the nature of warfare and how it is conducted illumine a series of challenges for the operational-level headquarters’ like the ARRC. And at a rapid speed unprecedented in the history of warfare, these challenges are emerging around the globe from both state and non-state actors, from the use of proportionate force, to cyber domains, to international law.

“Hybrid warfare is a strategy which blends conventional and irregular means of warfare… it has attracted considerable attention in recent years,” said Dr. Aurel Sari, a Senior Lecturer in Law at University of Exeter and the keynote speaker at ARRCADE Brief.

The exact age of hybrid warfare is itself a topic of debate, but it was clearly used to describe Hezbollah’s strategy in the 2006 Lebanon War. Since then, the term “hybrid” has dominated much of the discussion about modern and future warfare.

“Law and legal considerations are at the very heart of hybrid warfare. Hybrid threats are designed to exploit the gray areas and fault-lines in the law. They thrive on legal ambiguity and uncertainty; this threatens to undermine the rule of law. It is therefore imperative that we gain a better understanding of the legal dimension of hybrid warfare,” Sari said.

In the last decade, NATO and some of the most important military forces and coalitions in the world have attempted to address and counter hybrid threats.

According to a Wales Summit Declaration issued September 5, 2014, “We will ensure that NATO is able to effectively address the specific challenges posed by hybrid warfare threats, where a wide rage of overt and covert military, paramilitary, and civilian measures are employed in a highly integrated design.”

The fact hybrid warfare always stands as a possible reality used by adversaries, HQ ARRC is continuously working towards understanding, recognizing and facing the threat.