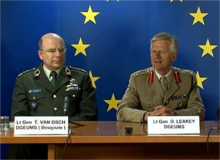 I am currently working on the legal nature and limits of the European Union’s competence in the field of the Common Foreign and Security Policy. I have written up some of my thoughts in this paper; a more comprehensive article will follow at a later date.

One of the aims of the Lisbon Treaty was to spell out the division of competences between the EU and its Member States in more precise terms. The Treaty has implemented this aim by distinguishing the Union’s competence in foreign policy matters from its competence in other areas. It is widely accepted in the literature that this distinction is meant to reflect the special character of the CFSP. However, treating the EU’s competence in CFSP as sui generis is not without its share of problems.

In my paper, I suggest that European foreign policy cooperation has developed along two separate tracks since the early 1970s: institutionalization and legalization. This twin-track approach has enabled the Member States to gradually extend their cooperation in foreign policy and security matters without delimiting the Union’s corresponding competence in this area in precise terms. The paper argues that in fact it is only as a result of the treaty reform process launched in 2001 that the question of Union competence over the CFSP has become a legal and political problem. It suggests that the solution adopted by the Lisbon Treaty fails to clarify what exactly the distinguishing feature of CFSP competence is. This is regrettable, because it could potentially open up a role for the European Courts to accelerate the legalization of the CFSP and lead to the kind of creeping competence that the reform process was meant to avoid. More generally, it also raises the question whether such a development could call into question the independence of the Member States and thus their continued Statehood.

The answer lies partly in a more precise delimitation of powers between the Union and the Member States in this area. My paper attempts to provide such a delimitation by relying on concepts developed in international relations and legal scholarship. I’m presenting these ideas at various conferences and workshops during 2011.