Clearing the Fog of Law 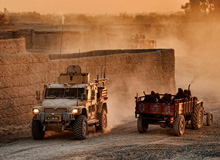 Legal considerations are increasingly shaping the strategic and tactical landscape in which the British armed forces operate. This development has sparked a lively debate about the legal framework governing overseas operations and whether legal constraints are undermining the operational effectiveness of the military. Much of this debate has been based on certain untested assumptions and misconceptions about the applicable law, leading some commentators to promote unrealistic policy options for safeguarding the operational freedom of the armed forces.

The purpose of the present project is to introduce greater granularity into this debate. Led by Professor Noëlle Quénivet (UWE Bristol) and Dr Aurel Sari (University of Exeter), the project aims to develop a more sophisticated understanding of the challenges posed by international human rights law and its real and perceived impact on military operations. The work is funded by the British Academy and will involve a series of workshops and other activities over two years.

Flexibility, initiative and the acceptance of risk are central to the British military ethos. However, in recent years concerns have grown that legal constraints are diminishing the freedom of action of the British armed forces to an ever greater extent and are undercutting their operational effectiveness. The subject has attracted the attention of the House of Lords and has prompted the House of Commons Defence Committee to prepare a report on the legal framework of the armed forces. In its report, the Committee suggested that the Government should take a more strategic approach in addressing the legal challenges facing the armed forces. Yet the adoption of such an approach is hampered by certain misconceptions about the applicable law and the allure of false strategic choices, as exemplified by ‘The Fog of Law’ report published by the Policy Exchange in October 2013. We therefore believe that there is an urgent need for more rigorous work in this area in order to dispel these misconceptions and to better inform policy-makers in time for the upcoming Strategic Defence and Security Review and beyond.

The project contributes to the ongoing public and academic debate about the legal regulation of British armed forces by pursuing two research objectives. Its primary objective is to gain a better understanding of the legal constraints imposed by international human rights law, in particular the European Convention on Human Rights, on British forces during overseas operations. The project’s secondary objective is to assess the need for more comprehensive research in this area and to develop the main features of possible follow-on research.

Our first workshop took place on 6 February 2015 at the University of the West of England in Bristol. Entitled ‘Human Rights and Military Operations: Confronting the Challenges’, its purpose was to bring together a group of subject matter experts, drawn from academia and the armed forces, to assess the current state of the debate. The event confirmed that the application of international human rights law, in particular the European Convention on Human Rights, to deployed operations presents significant legal and practical challenges. The proceedings also confirmed, however, that confronting these challenges requires a nuanced approach, as the nature of the problem neither demands nor admits of an absolute solution. In particular, the increased complexity and uncertainty of the law cannot be eliminated, but only mitigated. Flexibility and adaptability are therefore key. The findings of the workshop are summarized in greater detail in this workshop report.

For more information on the project, please contact the investigators.