Writing on the Wall: The Format of the Article 50 Notification 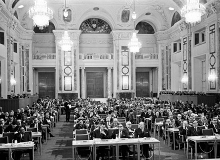 Does a notice to withdraw from the EU pursuant to Article 50 TEU have to be in written form? The Treaty of Lisbon has left this question open. In its second paragraph, Article 50 TEU declares that a ‘Member State which decides to withdraw shall notify the European Council of its intention.’ Nothing in this passage dictates that the notice has to be made in writing, yet nothing indicates that it may not be made in writing either. However, three points should be borne in mind in this context.

First, the United Kingdom is a party to the Vienna Convention on the Law of Treaties (VCLT) of 1969. Since the TEU is an international agreement within the meaning of the VCLT, the Convention applies to it, without prejudice to any relevant rules of the EU.[1] The UK is bound by the VCLT in its treaty relations under the TEU with those EU Member States which have been parties to the VCLT before the entry into force of the TEU.[2] France and Romania are not signatories to the VCLT, while Ireland, Luxembourg, Malta and Portugal have become parties to the VCLT only after they had become parties to the TEU. Consequently, the UK must observe the VCLT in its application of the TEU in the context of its treaty relations with all remaining EU Member States.

Any act declaring invalid, terminating, withdrawing from or suspending the operation of a treaty pursuant to the provisions of the treaty or of paragraphs 2 or 3 of article 65 shall be carried out through an instrument communicated to the other parties. If the instrument is not signed by the Head of State, Head of Government or Minister for Foreign Affairs, the representative of the State communicating it may be called upon to produce full powers.

Since Article 50 TEU provides that a notification to withdraw from the EU must be addressed to the European Council, this rule supersedes the requirement under Article 67(2) VCLT to communicate the instrument to the other parties of the TEU.[3] However, given that Article 50 TEU is silent about the form that the notification should take, the UK remains bound by the duty to communicate it in the form of an instrument bearing the signature of a duly authorised State representative, that is in written form.

Second, since the UK is bound by this rule as a matter of treaty law, it is not strictly necessary to determine whether a corresponding duty to communicate a notification to withdraw from a treaty in written form also exists under customary international law. However, it is worth noting that the International Law Commission considered such a duty to reflect a fundamental procedural requirement. Commenting on the predecessor of Article 67(2), it made the following statement:

The importance of the present article, in the view of the Commission, is that it calls for the observance of a measure of formality in bringing about the invalidation, termination, etc. of a treaty, and thereby furnishes a certain additional safeguard for the security of treaties. In moments of tension the denunciation or threat to denounce a treaty has sometimes been made the subject of a public utterance not addressed directly to the other State concerned. But it is clearly essential that any such declaration purporting to put an end to or to suspend the operation of a treaty, at whatever level it is made, should not be a substitute for the formal act which diplomatic propriety and legal regularity would seem to require.[4]

It is also worth noting that Sir Francis Vallat, who represented the UK at the United Nations Conference on the Law of Treaties, conceded that ‘it would certainly be necessary to communicate instruments’ of withdrawal,[5] thus accepting the need to express such acts in written form.

Third, although no precedent exists for an actual notification of withdrawal under Article 50 TEU, in 2010 France requested a change in the applicability of the Treaties to one of its overseas territories in written form.[6] It stands to reason that, as a matter of the Union’s own administrative principles, a notification intended to terminate the applicability of the Treaties to a Member State in their entirety should also be communicated in writing.

Consequently, the UK’s impending notification to withdraw from the EU must be made in written form.