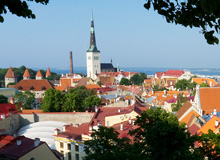 I have recently returned from a 3-day conference hosted by the Estonian Ministry of Defence to mark the 60th anniversary of the signing of the NATO Status of Forces Agreement of 1951. The conference took place in Tallinn, an absolutely charming city. Our Estonian hosts were amazing: the event was incredibly well organized and they even managed to lay on three days of sunshine. All I can say is that Tallinn is well worth a visit!

The speakers were drawn primarily from the NATO legal advisors community, with different panels focusing on the impact and application of the NATO SOFA and certain related issues, such as dissemination and teaching. I was kept fairly busy, having been invited to contribute to three different panels.

My first presentation made some comparative observations regarding the NATO SOFA and similar status arrangements. I argued that the rules and principles of international law governing the legal status of foreign military forces are uncertain in important respects: one source of that uncertainty lies in the fact that different specialized SOFA regimes exist and it is unclear how these regimes relate to general international law, in particular the law of State immunity. The existence of specialized regimes means that no single law of visiting forces governing the legal position of all foreign military deployments has emerged in international practice. However, some general principles may nevertheless be formulated, in particular the principles of functional immunity, implied prerogatives and operational necessity. To illustrate some of the conceptual and practical difficulties involved in this field, I offered a brief analysis of the NATO SOFA’s relationship with customary international law (for a more detailed discussion of this issue, see here).

In my second presentation, I talked about the EU Status of Forces Agreement of 2003, which governs the legal position of military and civilian staff deployed by the Member States of the EU within the territory of another Member State for the purposes of the EU’s security and defence policy (see here). In my final talk, I discussed the EU’s practice of concluding status agreements with third countries to determine the privileges and immunities of its crisis management operations (see here). A lot of talking, but a thoroughly enjoyable experience!