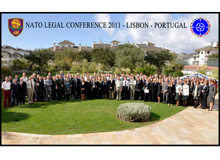 I had the pleasure of attending the NATO Legal Conference 2011 hosted by Allied Joint Force Command Lisbon on 24-27 October 2011. The conference theme was ‘Partners, Cooperation and Ad Hoc Relations’. Here is JFC Lisbon’s brief summary of the event (reproduced with permission):

The Conference brought together more than 120 representatives from 46 NATO Legal Offices located in 23 countries as well as senior legal advisors and officials representing NATO and non-NATO countries.

As expected, a large turnout including the distinguished speakers and participation from UN Human Rights Commission, International Committee of the Red Cross (ICRC) and other multinational organizations such as the African Union gave the chance to establish networks between various levels and organizations. This year, one of the main topics was establishing a knowledge sharing mechanism for the legal offices.