Derogations from the European Convention on Human Rights in Deployed Operations 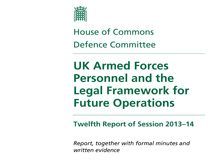 The European Convention on Human Rights (ECHR) is a key component of the legal framework governing the activities of the British armed forces. In recent years, the Convention’s application to military operations has come under growing criticism, leading commentators to call upon the Government to derogate from the ECHR during deployed operations. It is not immediately clear, however, whether or not derogations are in fact available to the UK in such circumstances. The purpose of this submission is to shed some light on this issue. The paper makes the following key points: