Future War and the Evolution of IHL 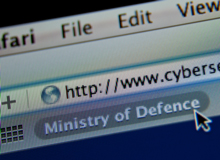 On 1 May 2014, Professor Michael N Schmitt delivered a seminar on ‘Future War and the Evolution of IHL’ at Exeter Law School. In his talk, Professor Schmitt offered his thoughts on the relationship between changes in the nature of warfare and the evolution of international humanitarian law. In particular, he asked how future warfare is likely to shape the interpretation and application of international humanitarian law, focusing on the effect of cyber operations, the fielding of autonomous weapon systems, and increased visibility of the battlespace. I had the pleasure of acting as a respondent.

The event formed the third meeting of the ‘Axis of Protection: Human Rights in International Law’ Seminar Series. The series, jointly convened by colleagues at the University of Exeter, Oxford and Reading, provides an opportunity for scholars to engage in discussion of contemporary and challenging issues concerning the protection of human rights in international law with emphasis on human rights law, international humanitarian law, and international refugee law.