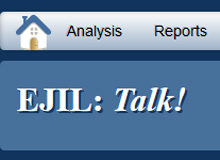 The recent High Court judgment in the case of Serdar Mohammed v. Ministry of Defence [2014] EWHC 1369 (QB) has sparked a lively debate about the authority to detain individuals in the context of a non-international armed conflict (NIAC). In response to a post by Kubo Mačák offering a critical perspective on Mohammed, Lawrence Hill-Cawthorne and Dapo Akande have lent their support to the judgment in arguing that no legal basis for lethal targeting and detention exists in IHL.

Essentially, Lawrence and Dapo advocate an understanding of IHL which conceives it as a purely regulatory framework in the sense that its sole purpose is to impose constraints on how States and non-State actors conduct hostilities, without recognising or conferring any rights on them to engage in such hostilities in the first place. On this view, killing and detention is permissible in armed conflict not because it is authorized by the rules of IHL, but because, and only in so far as, it is not prohibited by other rules of international law. In this post, I intend to demonstrate why this ‘Lotus approach’ to IHL is not compelling.