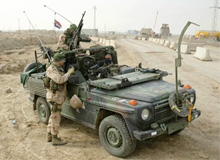 Last week, the Grand Chamber of the European Court of Human Rights delivered its judgment in Jaloud v Netherlands. The case arose out of the fatal shooting of Azhar Sabah Jaloud by Dutch troops in the early hours of 21 April 2004 at a checkpoint in Iraq. The applicant claimed that the investigation into the incident was inadequate and therefore in breach of the Netherlands’ procedural obligations under Article 2 of the European Convention on Human Rights.

Jaloud is the latest in a growing line of Strasbourg cases addressing the application of the Convention to extra-territorial military operations. The Court’s jurisprudence on the subject is a source of endless fascination. Like any good thriller, its twists and turns leave the observer suspended in fearful anticipation on a never ending quest for legal certainty. Will the law stretch as far as the facts or is jurisdiction a threshold too far? Will the Court prevail against conceptual confusion? Which of its dicta is up for silent reversal? And what will be the next victim of normative conflict?

Jaloud does not disappoint. The extraterritorial plot thickens and certainty remains in suspense. In this post, I will limit myself to the jurisdictional aspects of the case. Two points merit attention: the Court’s reasons for finding that the jurisdiction of the Netherlands was not excluded and the new category of extra-territorial jurisdiction over ‘persons passing through a checkpoint’.